Aliceana turns one tomorrow. Most of the time you hear parents say that it went so fast, but for me it feels like she’s been a part of my life for an eternity. It could be because the first year for us was pretty tough.
I could say it was easy, but it would be a lie, it was tough. Her first few weeks were spent in a hospital and every day there felt like it would never end. When we brought her home and she was on oxygen, it was tough. It was a lot more work than I was expecting as a first-time-parent. It was not only a lot more manual labor, (if I wanted to take her into another room I would have to switch oxygen tanks, if I had to change her clothes I had to deal with the tangled mess of an oxygen line,) but it was tough on me emotionally too. I tried so hard not to let it show, but it was hard. Especially hearing family and friends say things like “She’ll look so much better without that on her face.” or “She’ll be off of it by next Summer.” because we didn’t know, and the unknown scared me a lot. I just wanted my little girl to have a normal life, one where I could take her in public and people wouldn’t pity her or ask what’s wrong with her. Which was probably terrible of me, but it’s how I felt at the time.

We were absolutely blessed by some kind of crazy miracle and she was taken off of oxygen. I am so proud of my little fighter, she’s gone through so much in her little life and you would never know by looking at her today. Some of those feelings are still there, and I think they will be.

Aliceana is our extra special little girl.
(I love the weird smile she gave the camera here) 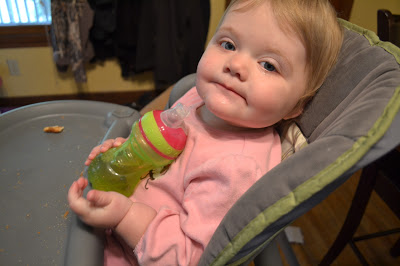 I actually overheard family members talking about all of her health troubles and how she overcame them at a party a couple weeks ago. To hear how proudly they spoke of her really touched me. She’s touched so many lives already, and I wish there was a way to thank everyone properly for hanging in there with us. Whether helping out, being supportive, having every stranger they know pray for her, heck maybe even the weird lady at Olive Garden that swore she healed Aliceana “in the name of Jesus.” I don’t know, maybe it all did help after all.
I was talking to a mom friend the other day about some of our parenthood worries. It got me to thinking that Motherhood is this crazy special thing. If you had told me last year that I would have to spend weeks with my daughter in a NICU and then have to learn how to be a mother to a baby on oxygen I don’t think I would have even been able to fathom being able to handle it. I did it though, I learned to adapt, took it a day at a time, and we figured things out.
So tomorrow, as my daughter officially turns one. I am so proud of everything she’s overcome. We’ll be spending the day at the zoo with a couple of our closest friends, and Sunday is her Aliceana in One-derland birthday party. She’s getting her own 6 inch “smash” cake, so this should be quite the site! (Don’t worry I’ll come back next week and tell you all about our weekends adventures!)
Happy Birthday Aliceana, you are one loved little girl!