I consider myself a late blooming geek, I mean the tell tale signs were always there, I would farm in every video game even when resources weren’t a big deal, but hey, I always wanted 99 lives in Crash Bandicoot, and all the apples in Aladdin on Super Nintendo. I even dabbled in Pokemon in grade school, but I traded all my good cards for the cute ones. I’ve always been the somewhat geeky girl that would much rather talk about gross Sci-Fi than what kind of nail polish is in season.

So long story short, I was in my 20’s when I first saw Star Wars. I know, I know, I’m a terrible person. When I finally sat down and watched the series I loved it, well loved, the original Star Wars movies. Episodes I, II, and III, are definitely not on my list of movies to rewatch (until the machete order came around, now only Episode I is dead to me.)

Now that Aliceana is three, it was time to expose her to Star Wars, the kid needs to know what the cool pictures in her room are after all. By the way, three is the perfect age to introduce your children to Star Wars, they won’t understand the plot, but they’ll develop a love for R2D2, Yoda, and Aliceana’s favorite: Chewbacca. Guys, did you know R2D2 fell down? That’s all I’ve been hearing about the last few weeks, that and her love for “silly Chewbacca.” I think it’s awesome though, she likes the series already, and as she gets older she’ll be able to understand way more than the cute characters. 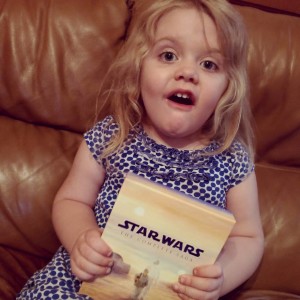 So let’s talk about the order in which we watched Star Wars. The first time I watched we watched the classics first (IV, V, and VI) then we watched the newer trilogy (I,II, and III.) I hated ending on episode III, it made me absolutely furious. Anakin turned into a jerk and is now Darth Vader, and ending the epic series like that sucks.

So when we introduced Aliceana to Star Wars, we used the machete order. You might have heard about it online or maybe even on the Big Bang Theory.

You start with episodes IV, and V. Then watch episodes II and III as flashbacks. Now go forward in time and watch the epic conclusion of Star Wars. (Well, the story so far, that’ll change this December.)

What did we think about the machete order?

I think it’s absolutely perfect. This is the order you should show your girlfriend, grandma, kids, or weird neighbor when you introduce them to the series.

To start off, The original trilogy is obviously the best, so it makes sense to start off by diving into the first two of those as was intended. While you’re really getting into the turmoil of it all, we shake it up a bit and stop for the longest flashback ever to discover the story of Anakin and Padme, minus all the racing, Darth Maul, and Jar Jar Binks crap. We can all agree that it’s all really unnecessary.

So essentially you’re getting a good idea of what the force is, who the main characters are, and all of the other essentials from episodes IV and V. Then once you’re amped up on your trivia and you know a thing or two, like…uh most well known in the history of ever spoiler alert, Mr. Vader is Luke’s father. We use the force (or our Blu-Ray player) to find out why this once awesome Anakin Skywalker turned to the Dark Side.

Let’s back up, just the idea of getting rid of Darth Maul and Jar Jar Binks is probably appealing to you in itself, isn’t it? Yes, the machete order rocks.

Then you watch Anakin make the downward spiral into the dark side, I heard they had cookies, I would be enticed too.

You watch this character that had potential to be great, if he wasn’t so darn selfish and power hungry, turn into the most epic bad guy of all time. He slays cutie little Padawans, he needs to go…and that’s where the Machete Order leaves you, with all this hatred for Darth Vader, just in time to watch the final battles between Luke Skywalker and Darth Vader. Also, you’re rewarded with ending the series with adorable Ewoks. Mostly though, it concludes the whole storyline the way it should be concluded.

That bitterness that I felt watching it with the original trilogy then the newer trilogy, didn’t happen. I also didn’t have to sit through Episodes I, II, and III just to get through the good stuff.

So I hands down can tell you that I believe this is the correct way to watch Star Wars. Introduce your kids to Star Wars with the Machete Order. Just do it.