It’s that wibbly wobbly timey wimey of the year again. I bought AJ some really great gifts for Father’s Day, but you have to have the obligatory kid craft, and the obligatory craft beer. Crafts and beer go together like craft beer, aha, I’m so punny.

Since ties are a big Father’s Day theme, I decided to roll with that, but rather than the long formal ties, I went with bow ties. Bow ties are cool…and you know bow ties let me make that Doctor Who reference so it’s a win-win. 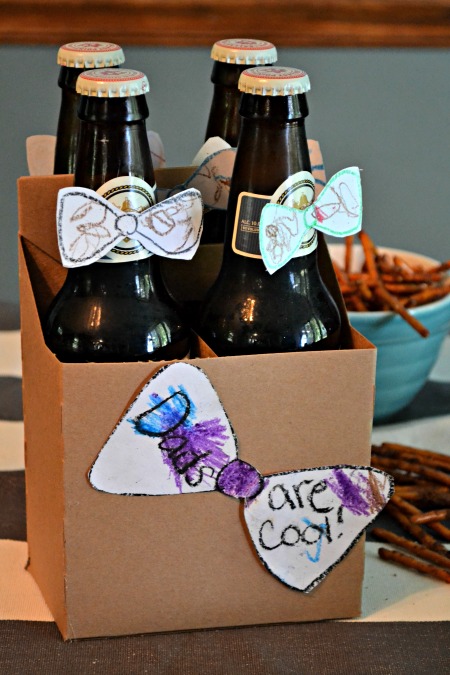 The only thing that could have made this better was a fez. Yep. I’m kicking myself for not including a fez. Oh, the missed opportunity.

I can’t share all the cool stuff I bought AJ for Father’s Day, I actually gave him this one early, but the other ones have to wait until Sunday. (I’m the type of gift-giver that despises waiting to give gifts, how about you?) 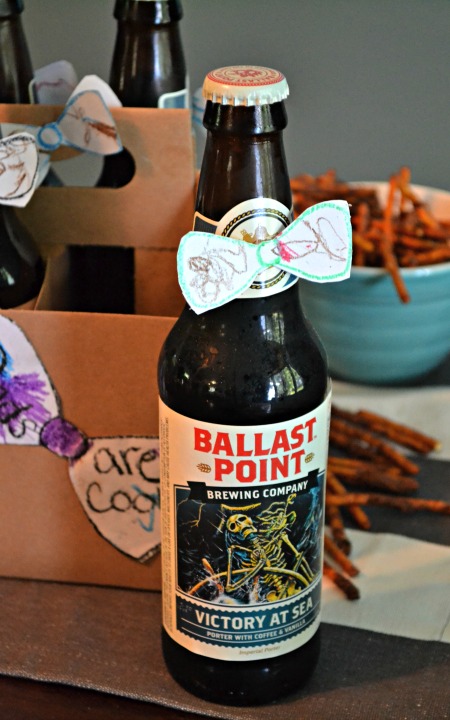 Ok, so this how I created this uber quick little project. It’ll take you about 20 minutes max, and that includes the time allotted for your child to color. I’ll include some affiliate links to make the crafting process easier for you!

To make this craft I picked a 6 pack of craft beer that I know he hasn’t tried yet. I chose an Imperial Stout with coffee and vanilla.

Then I selected a 4 pack beer carrier

Next up, the kid craft part. I took some blank index cards

and drew and cut out bowties. Then I let Aliceana color them as she wished. I wrote “Dads are cool” on the big bow.

Then I used a little bit of hot glue to secure the bow ties. I like using mini hot glue guns like this one

, and I think I have like 3 of them in my arsenal.

That’s it! Easy peasy, and super cute. While combining beer, kids crafts, and Doctor Who references. That’s an adorable win-win-win!

What are you getting dad for Father’s Day?

Previous Post: « Prison Cheesecake recipe, in case you think orange is your color
Next Post: Homemade Honey Marshmallow Dragon’s Teeth (+ Behind the scenes at Dreamworks Animation) »